Trends in the hydrologic regime of Alpine rivers 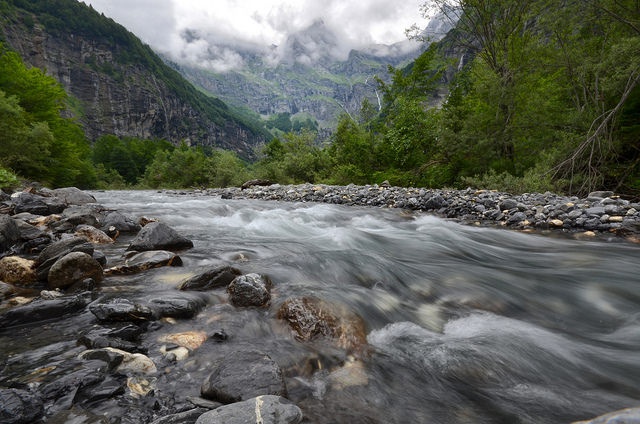 Global warming affects precipitation volumes in the Alps, the contribution of rain and snow to these volumes, and the timing of snowmelt. An overall decrease in snow cover is observed during the 20th century for low- and mid-elevations. Trends are less significant at higher elevations, and snowpack even increased due to higher precipitation totals. These changes affect stream flow of mountain catchments. These changes were investigated for a large number of catchments over the period 1961–2005 in six Alpine countries (Austria, France, Germany, Italy, Slovenia and Switzerland), with catchment size varying mainly between 100 and 1000km2.

Over the last decades, hydrologic regime of Alpine rivers has changed. These changes vary with the character of hydro-climatic regimes. During 1961–2005, all regimes show a consistent shift toward an earlier start of  snowmelt flow, with a trend magnitude of 11 days, along with an increase of 18 days in the duration of the snowmelt season. Also, distinct differences have been observed between glacial- and snowmelt-dominated regimes, and mixed snowmelt–rainfall regimes:

Pure glacial- and snowmelt-dominated regimes are found in the heart of the Alps. These hydrologic regimes are mainly controlled by the storage of precipitation as snow and ice during the cold months. Lowest flows occur between December and February, highest flows during spring and summer. For these regimes, winter droughts have become less severe: drought durations have decreased by an average of 25 days over 1961–2005 and volume deficits have decreased by an average of 47%. Glacial regimes, in particular, show a consistent behavior with a melting season shifted by a week earlier, an increase of 29% in the snowmelt volume, and an enhanced contribution of the glacier to the total stream flow of corresponding catchments.

Mixed snowmelt–rainfall regimes are found in pre-alpine regions. They exhibit two low flow seasons: during the winter when part of the precipitation is stored as snowpack, and during the summer due to a combination of earlier snowpack shortage, lack of precipitation and high evapotranspiration. For these regimes, high flows are mainly driven by snowmelt during the spring and by abundant precipitation in autumn. For these regimes, winter droughts seem to have become more severe: volume deficit in the Southeastern Alps (mostly Slovenia) has increased by 10%.

Whether these trends are linked to climate change or to climate decadal variability remains an open question.