Explaining extreme events of 2014 from a climate perspective 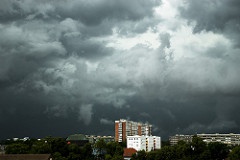 Recently, the American Meteorological Society published a large number of studies on extreme events in 2014, focused on the question whether these can be (partly) attributed to climate change. Some of these studies are about events in Europe.

Fall thunderstorms along the northern Mediterranean coast can produce a few hundred millimeters of precipitation within one day. These phenomena are triggered by moist air advected from the warm Mediterranean Sea, hitting the mountain range with convection possibly amplified by colder continental air aloft. Such extremes occurred repeatedly during the fall of 2014, inducing floods and casualties in several places during the season. Extreme precipitation In the Cévennes mountain range reached more than 300 mm in a day in the fall of 2014 and induced a record (since 1950) maximal intensity when averaged over an ensemble of rain gauges. In this area since the middle of the 20th century, maximum daily precipitation in fall has increased about 30% and the return period of events such as those found in 2014 is estimated to having been reduced by a factor of about three. At least part of these trends is due to warming.

2. Record annual mean warmth over Europe, the Northeast Pacific, and the Northeast Atlantic during 2014: assessment of anthropogenic influence.

2014 has been a warm year. The risk of record annual mean warmth in parts of Europe, as occurred in 2014, has been greatly increased by anthropogenic climate change (according to an analysis based on a large number of climate models).

3. Was the extreme storm season in winter 2013/14 over the North Atlantic and the United Kingdom triggered by changes in the West Pacific warm pool?

The period from December 2013 to February 2014 was the stormiest season in the United Kingdom since at least 1871. However, the all-time record number of storms over the British Isles in winter 2013/14 cannot be linked directly to anthropogenic-induced warming of the tropical west Pacific.

4. Hurricane Gonzalo and its extratropical transition to a strong European storm.

Tropical hurricanes might become a serious threat for Western Europe in the future. In October 2014 hurricane Gonzalo turned into a strong European storm, hit the northern part of the United Kingdom, crossed the North Sea and then central parts of Europe, and went down to the Balkans. Maximum wind gusts were 100 and 180 km/ h, causing North Sea storm surges and regional precipitation amounts of 50–100 mm in 24 hours. An analysis showed that this event cannot be attributed to climate change; the event is a rare event, but not an unprecedented one.