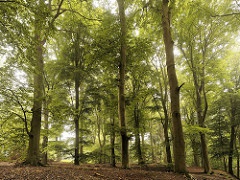 Drought and heat-induced tree mortality is accelerating in many forest biomes as a consequence of a warming climate, resulting in a threat to global forests unlike any in recorded history. It has been stated that tall plants with low hydraulic conductance and high leaf area are most likely to die from future drought stress, implying that tall trees of old-growth forests are at the greatest risk of loss. Thus, it was concluded with high certainty that today’s forests are going to be subject to continued increases in mortality rates that will result in substantial reorganization of their structure and carbon storage. As a result, today’s forests generally should be replaced by shorter and more xeric plants, owing to future warmer droughts and associated wildfires and pest attacks.