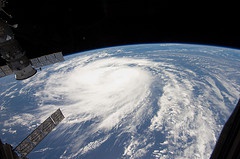 In the present climate most of the intense storms in Western Europe occur in winter. However, a recent study, based on a very high resolution global climate model, predicts some major changes by the end of the twenty first century. For the future climate, a significant increase in storminess is to be expected during Autumn in Western Europe, due to a shift in the storm genesis region: severe storms originate in the tropicial zone of the Atlantic Ocean over warm waters. Also in the present climate tropical cyclones do occasionally reach the mid-latitudes and re-intensify into powerful storms such as hurricane Irene in 1999. It was shown that the number of Beaufort 12 (>32.6 m/s) storms impacting Europe increases considerably in future climate simulations. Mainly the eastward expansion of the tropical cyclone genesis is thought to be responsible for storms forming further east and recurving towards Europe.

These results are confirmed by a new study, based on a more extensive set of storms (including Beaufort 11) of which the evolution is studied in greater detail. According to the results of this new study, in a warmer future climate, Western Europe will see larger impacts from severe Autumn storms. Not only their frequency will increase, but also their intensity and the area they affect. In general, it can be said that tropical air will have a greater impact on the future European weather through more severe Autumn storms. While storms in the present climate usually peak in intensity west of the British Isles, they do so further northeast in the future. As a consequence, the North Sea region and Scandinavia will experience significantly more Autumn storms. Also the Bay of Biscay area will see a considerable increase in storminess.

The new study was carried out for the present (2002– 2006), near future (2030–2034) and future (2094–2098) climate, and based on the moderate so-called RCP 4.5 scenario of near future and future greenhouse gas concentrations (comparable to the SRES A1B climate change scenario). The authors stress that it is hard to assess uncertainties and to validate the results, due to the fact that only one future climate scenario and a single model was used.