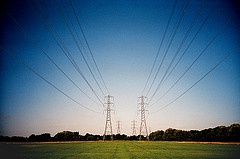 Extreme heat waves have an impact on western European electricity supply due to the increased electricity demand for cooling and the power limitation of thermoelectric plants due to regulation constraints concerning downstream water temperature. At least the two most severe heat waves during 1979–2008 (those of 2003 and 2006) had a negative impact on western European electricity supply, with shut downs of thermoelectric plants.

Therefore, changes of western European heat wave characteristics have been studied for the end of the twenty first century (2070–2099), compared with 1979–2008. Heat waves were defined as periods of at least 3 consecutive days of extremely high daily maximum temperature affecting at least 30 % of Western Europe. For the high temperature threshold the 98th percentile of the daily maximum temperature during March-October was chosen; for western Europe, this more or less agrees with a threshold of 30°C, commonly used to define a “hot day”.

The study is based on 19 climate change models and three scenarios of future greenhouse gasses concentrations (the so-called RCP2.6, RCP4.5 and RCP8.5 scenarios) that cover a range of moderate to high-end climate change projections. The results indicate a strong increase of the number of heat waves. Besides, the average future heat wave lasts longer, is more extended and more intense. Heat waves with similar or higher severity than observed for the 2003 heat wave remain rather rare, except for the most extreme scenario of climate change (RCP8.5).

For the more moderate scenarios of climate change (RCP2.6 and RCP4.5), the median values of highest simulated severities for all model results are comparable to the 2003 heat wave; for the high-end scenario (RCP8.5), heat waves (median of all model results) with 5 times higher severity than the 2003 heat wave are simulated. For this scenario, planners would need to adapt to yet unprecedented heat wave severities.