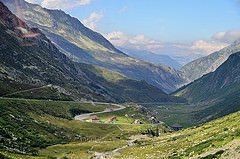 Climate change is considered a large threat to especially montane species. These species often inhabit narrow elevational ranges and it is widely expected that they will be forced to move to higher elevations due to global warming. Generally it is considered that the area decreases with altitude and upslope shifts could leave species with less habitable area as they approach mountain peaks. This would make them more vulnerable to extinction.

This line of reasoning, however, seems to be too simple. Scientists have shown that 68% of the world’s mountain ranges do not conform to the dominant assumption in ecology and conservation that area decreases monotonically with elevation from a mountain range’s base (which would be the case if all mountains were shaped like pyramids). Only in a few regions, such as Europe, coastal North America, Southeast Asia and eastern Australia, are pyramid mountains the norm rather than the exception.

Complex topographies result in landscapes in which available area can actually increase with elevation. Thus, some species responding to climate change by shifting upslope may actually benefit through increases in available area.