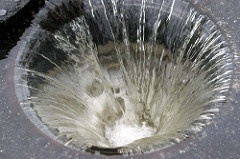 In July 2012 extreme rainfall caused a flash flood near the Black Sea town of Krymsk that killed over 170 people. The daily precipitation total exceeded all previous annual daily maxima since 1936 by a factor of two.  On the basis of statistical evidence from the pre-2012 record, the magnitude of the Krymsk event should have been virtually impossible, suggesting a shift in the background climate. The Krymsk event’s rareness raises the question of whether it is a mere statistical outlier, or whether changes in climatic conditions contributed to the extremeness.

Regional climate model runs showed that this flood could be attributed to climate change: incremental warming of sea surface temperature in the Black Sea over  the past few decades seems to have played a crucial role in amplifying the extreme precipitation. The model run with the scenario of the observed temperatures in 2012 showed an increase in the simulated precipitation around Krymsk of 300% when compared with the scenario where the average warming over the previous 30 years had been removed.

The global warming trend in surface temperatures over The  Black Sea has dramatically increased the risk of an event like the July 2012 flash floods.