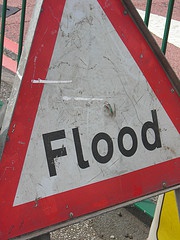 In 2007, heavy flooding in England and Wales followed very high daily and 5-day totals of rainfall, resulting in economic losses of approximately £3 billion. Are these observed extreme events just bad luck or is heavy rainfall in summer, especially in July, something we have reasons to expect in the future and should begin adapting to in terms of infrastructure planning?

This has been studied by modeling the historic situation and a situation of the “world that might have been” without anthropogenic forcing of climate change.

Three time slices were studied: the decades with the historic situation for 1960-1970 and 2000-2010, and the decade 2000-2010 in a representation of a world that might have been without anthropogenic climate change. The study focused on 5-day means of rainfall since 5-day means were considered to be a better proxy for flood risk than daily means.

The results show that high precipitation events like that which caused the floods in 2007 have become more likely. The risk of 2007 type July extreme precipitation has more than doubled due to anthropogenic climate change. The same cannot be said for summer precipitation as a whole as results for August and especially June are less clear.