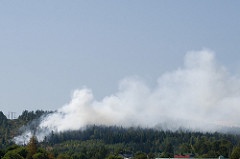 Forest fire risk in Sweden is limited, compared with other countries. The total annually burnt area of forest has not exceeded 5000 ha since 1950s for most years.

Future projections of changes in forest fire risk have been made for northern and southern Sweden, based on a regional climate model and the intermediate A1B climate change scenario. According to these results, northern Sweden is likely to be a fire-resistant region in the future climate (until 2100) where the number of days with high fire risk is found to be lower than today. In contrast, southern Sweden is projected to become a more fire-prone region with an increased number of days with a high fire risk.

In northern Sweden, especially autumn is found to become more prone to forest fire. This is mainly due to the increase of temperature and wind speed. For summer, today’s main fire risk season, the projected moister air, increased precipitation and relatively stabilised wind speed balance out the effect of the warmer climate.

In southern Sweden, the most fire-prone season in future is likely to be summer, where less precipitation, warmer temperatures and higher wind speeds are projected. Until 2100, the fire risk in summer is projected to increase by 20% as the climate in the distant future becomes drier, warmer and windier.