Observed climate-induced changes in plant phenology in the Netherlands 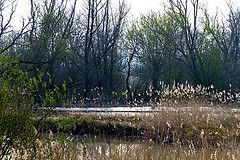 From a long-term dataset (1868-2010) of phenological observations of 320 plant species it was concluded that until the beginning of the 1990s, there have been no significant changes in the timing of plant life cycle events in the Netherlands. During 2001-2010 the timing of flowering, leaf unfolding and fruit ripening has advanced on average by 13 days compared with 1940–1968. Some species have advanced up to over 35 days. Autumn events occurred up to an average of 7 days later in 2001-2010 compared to 1940–1968.