Future temperature and precipitation changes in the Swiss Alps. 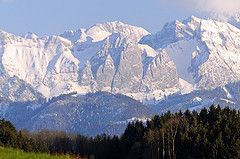 Warming is stronger in the Alps than in the Swiss lowlands (according to several scenarios and regional climate models): about 1 °C for the summer in the second half of the 21st century compared with 1980–2009. This altitude-dependence of temperature change is likely related to the snow-albedo (less snow at higher elevations means more warming) and other feedback mechanisms. Projections indicate warming of about 1 to 6 °C for the Alps until the end of the 21st century, strongly depending on the scenario and the lead time.