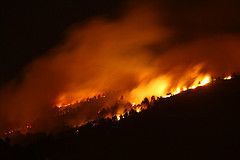 During the period 1970–2010, the number of fires in Eastern Catalonia (North-East Spain) decreased, indicating that past improvements in management actions have more than counterbalanced the climatic trend. An increasing effort in fire management, considering both fire prevention and fire extinction, is presumably one of the main causes for the observed change. For instance, after the big fires in the 1980s, fire management strategies were improved), including: the generation of daily maps of fire risk, combing weather forecasts and vegetation maps obtained by satellite and aerial photography; the presence of fire-guard in areas of risk of fire; the use of specific aerial means (e.g. Canadairs); the increasing awareness of the population and its coordination with fire-fighters.

It was shown, however, that for future projections of climate change (A1B scenario) for 2001-2050 compared with 1970-2000, the number of fires may increase in absence of further improvements in fire management.

For these projections of climate change, the trend of burned area is non-significant and slightly negative. According to the researchers, this could be associated with the importance of antecedent climate conditions for this variable: warmer conditions can act on the fuel structure by limiting the availability of fine fuel and favouring fuel gaps, thus reducing the spread of large fires. However, the researchers stress that the increasing number of fires might increase the chance of large fires as well because the fuel load and connectivity may increase, for example due to land-use and land-cover changes. According to them, an increased effort in future fire-management policies is needed, combing prevention (e.g. increasing efforts to avoid ignitions during those days with adverse weather conditions; reducing fuel load and continuity with prescribed burning and with fuel-breaks) and suppression strategies (in particular investing in the early stage of extinction).