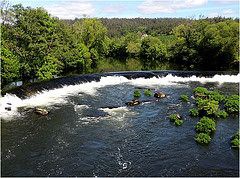 The headwaters of the main Spanish rivers are located in mountainous territories where late-autumn and winter precipitation falls in the form of snow leading to the formation of a sustained snowpack.

Hydrology of 27 mountain rivers was studied that were not disrupted by major human interference (e.g., dams or reservoirs). This was done for the period 1976–2008. These rivers are considered representative of the wide variety of mountainous rivers in continental Spain, as at least one river in every high-elevation mountain chain was studied. It was shown that the spring peak derived from snow-melting is either losing relevance with respect to winter flows, or is shifting earlier in time. In the majority of cases the observed shift accounts for more than 8 days/decade, i.e. 4 weeks during the studied period, although not for all rivers the observed trends are statistically significant (at the 95% confidence level). The decrease in the snowfall/rainfall ratio in winter and the earlier snowmelt in spring are thought to be the main causes for the observed changes in streamflow timing.

Hydrological simulations for two of these studied rivers for the period 2035–2065 with respect to 1970–2000 (A1B emissions scenario) indicate further shifting of spring peak flows along with a more pronounced low water level period in the summer.