Effects of climate change in the northern Adriatic Sea 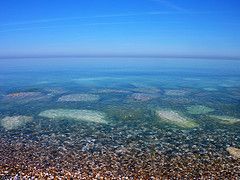 The northern Adriatic Sea has been influenced by significant warming of air temperature, changes in precipitation pattern, and a varying Po river runoff during the last two decades, and these changes are likely producing variations of marine properties. In this area, important changes have been reported in plankton organisms (including a reduction of the phytoplankton biomass).

These environmental changes could have important impact on fish abundance and community composition, but also on modification of nursery areas, changes in juvenile survival, and lack of synchronization between predators and preys. Changes in environmental conditions, particularly river discharges, influence the recruitment of anchovy (the most caught commercial species) in the northern and central Adriatic. An important decreasing trend has been recorded for total biomass of target demersal fishes and for small pelagic fish catches.