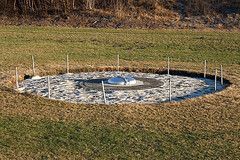 Future climate change will affect recharge rates and, in turn, the depth of groundwater levels and the amount of available groundwater. Groundwater recharge depends on the distribution, amount and timing of precipitation, evapotranspiration losses, snow cover thickness and snow melt characteristics, and land use/land cover. The properties of the aquifer are also essential; small, shallow unconfined aquifers respond more rapidly to climate change, whereas larger and confined systems show a slower response. It is expected that in snow-dominated regions, warmer winters will cause snow melt and groundwater recharge and runoff to occur over longer periods and earlier in the year. Increased aquifer recharge will increase wintertime groundwater levels, whereas in spring and summer the groundwater levels may decrease with a warmer climate.

Southern Europe will have less recharge overall and the region may become more water stressed than at present, with any increase in winter recharge unable to compensate for the reduced autumn recharge. Southern Spain is predicted to be among the worst affected regions in Europe, with almost total disappearance of recharge.

From an ecological point of view, ecosystems will show a more contrasted variation in temperature and nutrient concentrations when fed by local groundwater systems compared with regional ones. As a consequence, it is likely that larger systems will be more resilient to climate change.