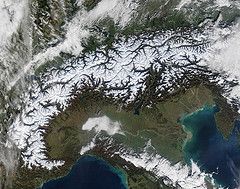 Data on new snow sum and days with snowfall over the period 1864-2009 show large decadal variability. For low stations in the Swiss Alps the lowest values were recorded in the late 1980s and 1990s; for higher stations the values of late 1980s and 1990s are at least among the lowest since the late 19th century. The amount of maximum new snow shows no clear trend over this 145 year period, however.