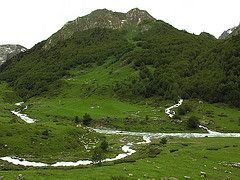 Between 1959 and 2005 the occurrence of warm events in the winter (December to March) in the Ebro basin has increased. The annual number of warm days (defined as days with maximum temperature higher than the 90th percentile of all observations of maximum temperature during this period) increased from 3–8 days per winter at the beginning of this period to 14–22 at the end of this period. Also, there was a marked and statistically significant increase in the number of melt events at altitudes >2000m a.s.l. in the Pyrenees during recent decades. The increase was particularly evident in the number of melting nights (defined as nights with minimum temperature at 2000 m a.s.l. higher than 0°C).

These changes explain the change in snow accumulation and in the river regimes of mountain headwaters in the Ebro basin, where winter runoff has increased in importance relative to spring flows. Currently, winter snow accumulation controls more than 40% of the spring runoff, and determines the capability to fill the Pyrenean reservoirs which supply water for large irrigation areas in the dry Ebro valley.

According to climate change projections for the periods 2021–2050 and 2051–2080, compared with 1961-1990, based on 12 regional climate models and the A1B emissions scenario, the number of warm winter nights will continue to increase, especially in the mountain areas. In this study, warm nights were defined as nights with minimum temperature higher than the 90th percentile of all minimum temperatures calculated for the reference period 1961-1990.

These projected changes will significantly impact on snowpack as a consequence of changes in snowfall/precipitation ratio and an earlier snowmelt. Moreover, the possibility to produce artificial snow in ski runs is expected to be severely reduced. These changes impact on the economic feasibility of ski resorts and threat the water supply for agriculture and domestic use. An increase of winter runoff and a decrease of spring runoff could force to change the reservoirs’ management strategies, with an earlier filling that reduces the possibility to control floods. Such reduction is problematic because temperature increases may result in more frequent winter floods in rivers of the snow dominated headwaters. Moreover, a higher frequency of warm events during winter may lead to earlier blooms and growth of trees and crops in the region, which could increase their vulnerability to frost events.