Future electricity generation and cooling water use in the UK 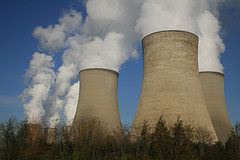 Four types of cooling systems are being used: (1) once through (open loop), where heat is removed through transfer to a running water source, (2) closed (re-circulatory), where heat is removed to the air by re-circulating water cooled in ponds or under cooling towers, (3) air-cooled, where heat is removed by air circulation via fans and radiators (a setup that can operate without water), and (4) hybrid, where cooling towers can operate both with and without cooling water. Water is being abstracted from three types of water systems: freshwater, tidal water, and coastal/ sea water. All of the UK’s freshwater cooled thermoelectric generation is in England and Wales whilst for tidal water the proportion is 91%.

The current levels of tidal and sea water abstraction in the UK are 40–50 times higher than freshwater abstraction, although consumptive proportions (the part of the abstracted water that does not flow back into the water system) are only 2% and 1% respectively, due to the use of once through cooling.

Over the years all inland coal plants in the UK have switched from open to closed loop cooling, whilst gas plants are a mixture of both. Closed loop reduces environmental impacts as thermal discharge is to the air (instead of to water) and abstraction volumes are small, although consumptive losses are higher. Coastal power stations almost always use open loop cooling, but the effects of thermal pollution and fish entrainment and impingement on local ecology can be substantial.

When sufficient cooling functions are not possible, power station operators are required to ‘ramp down’ the generation output in order to reduce cooling demand, whether this is to maintain safe and efficient operation or to protect the aquatic environment according to legislative constraints on abstraction volumes and discharge temperatures.

A reduction of CO2 emissions by 80% by 2050, a legally binding target of the UK Climate Change Act 2008, may be reached through several pathways of different mixtures of energy sources. These pathways have impacts on the water resources. Pathways with high levels of nuclear and carbon capture and storage, for instance, show an increase of abstraction and consumption levels that far exceed current use. Carbon capture and storage technology, especially, significantly increases the intensity of freshwater consumption.  Significant reductions in freshwater consumption are possible through wide scale use of hybrid cooling, which would increase the level of freshwater resources available, for either the electricity sector or other uses. Hybrid cooling would however marginally increase cost and emissions, but also security of supply, by enabling the use of air-cooling during low flows when abstractions may be prohibited.

With high levels of nuclear, abstractions of tidal and seawater can be expected to increase substantially. The greater the need to protect inland water resources for agriculture and public water supply, whilst maintaining levels of environmental quality, the greater the pressure will be to shift thermoelectric generation towards the coast. In this case, careful management of the effects of fish entrainment and thermal pollution in marine and estuarine environments will be required.