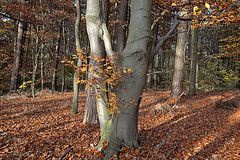 European beech Fagus sylvatica (L.) is one of the main tree species in Central Europe. Without human interference, beech would probably cover more than two thirds of the forest area in Central Europe instead of their current share of less than one fifth. For example, in Germany, beech covers approximately one-third of all forested areas.

The impacts of climate change on a beech forest in Germany (the federal state of Rhineland Palatinate) was studied for climate change projections based on a larger number of climate models and the A1b emissions scenario.

Results show that net primary productivity of beech decreases by 30% in 2071− 2100 compared with the reference time span 1961−1990. This is caused by higher mortality rates, lower water availability and higher drought stress, though partly counterbalanced by longer growing seasons.