Forest fire danger changes in Finland due to climate change 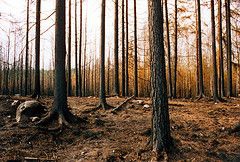 Finland is Europe’s most heavily forested country, with 75% of its land area covered by forests. During the past 3 decades, the average number of forest fires has been about 1000 fires annually.

Changes in temperature and precipitation have been estimated for 2010−2029 and 2080−2099 compared with 1961-1990. From these estimates, changes in the number of days with a high forest fire danger in Finland were estimated for the forest fire ‘high season’, i.e. June to August.

The climate change projections showed an average summertime mean temperature rise in Finland by 1.5°C for 2010−2029 and by 4°C for 2080−2099, and a general precipitation increase for most of the country. These changes would result in an increase of the probability of forest fire danger days (FDDs) by 56-75% for 2010−2029 and 71-91% for 2080−2099. The estimated probability increase was largest in northern Finland and smallest in eastern Finland. On average, the number of forest fire danger days was projected to increase by 1 day for 2010−2029 and by 7 to 10 days for 2080−2099, compared with 1961-1990. The uncertainty in this number is mainly due to uncertainty in the sign and magnitude of future precipitation change. The actual number of fires ignited, however, also strongly depends on socio-economical changes.

Besides a projected increase of the number of forest fire danger days during June to August, the forest fire season probably will start earlier as well due to a projected earlier end of the snow season in the boreal environment. Forest fire activity starts soon after snowmelt, when organic debris from the previous growing season is exposed and dried. A shift of fire activity towards the spring has already been observed.