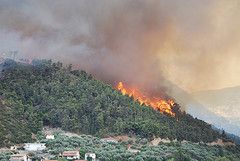 Over the last 150 years, 2 out of 4 years with greatest increase in burnt area occurred in 1998 and 2007 when both above-average temperatures and below-average precipitation coincided during the mid- to late fire season. These fires most likely have had more surface burning fuel to propagate compared with those in previous decades because of rural depopulation in northern mountains of the Mediterranean, thus resulting in (1) reduced harvesting of biomass and (2) longer periods of fire exclusion (during which burning fuel accumulated) because of lower human activity.

Mediterranean mountainous areas may face a very large threat from wildfires in the twenty-first century, if socioeconomic changes leading to land abandonment and thus burning fuel accumulation are combined with the drought intensification projected for the region under global warming. In the Mediterranean, the area burned by wildfire can be expected to increase by a factor of 3–5 at the end of the twenty-first century compared with the present as a result of a dryer summer climate (A2 IPCC emission scenario), with Greece appearing as a typical example of such regions.

Developing fire risk assessment tools that enable long-term fire danger prognosis and battling the accumulation of burning fuel should be a top priority to reduce fire spread, especially if rural depopulation further continues in northern mountains of the Mediterranean.