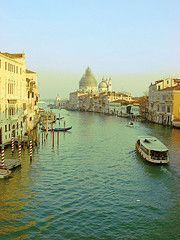 The impact of global warming on the cultural world heritage through sea level rise has been estimated for the next 2000 years. A time scale of 2000 years is short enough to be relevant for the societal discussion on climate change with regard to the cultural heritage, since a number of UNESCO sites are as old as or older than 2000 years. There are 720 sites listed in the cultural and mixed categories in the UNESCO World Heritage List (obtained in October 2012). Mixed sites are sites of both cultural and natural significance.

If the current global mean temperature was sustained for the next two millennia, about 6% (40 sites) of the UNESCO sites will be affected, and 0.7% of global land area will be below mean sea level. These numbers increase to 19% (136 sites) and 1.1% for a warming of 3 K. The spatial distribution of UNESCO cultural heritage sites, of population, and of the countries impacted most by future sea level rise is such that the percentage of the cultural world heritage impacted by sea level rise is significantly greater than the percentage of land surface below sea level.

There are some limitations to this study, though. Only changes in local mean sea level have been considered, while episodic flooding will already impact sites at lower sea level rise, especially if storminess, and thereby sea level variability, increases. Furthermore, adaptation measures like dike building have not been considered; the results merely illustrate the adaptive pressure caused by future sea level rise.