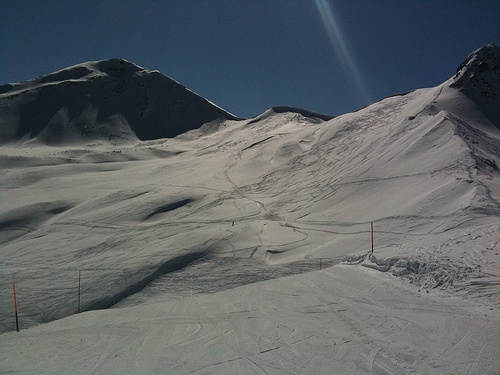 Changes in mean winter snow water equivalent (SWE), the seasonal evolution of snow cover, and the duration of the continuous snow cover season in the European Alps have been assessed from an ensemble of regional climate model (RCM) experiments under the IPCC SRES A1B emission scenario. The assessment was carried out for the periods 2020–2049 and 2070–2099, compared with the control period 1971–2000.

The strongest relative reduction in winter mean SWE was found below 1,500 m, amounting to 40–80 % by mid century relative to 1971–2000 and depending upon the model considered. At higher elevations the decrease of mean winter SWE is less pronounced but still a robust feature. For instance, at elevations of 2,000–2,500 m, SWE reductions amount to 10–60 % by mid century and to 30–80 % by the end of the century.

The strong reduction of mean winter SWE in the Alps is expected to have major impacts for winter tourism. Many ski-regions have mean elevations below 2,000 m and are therefore especially vulnerable to climate change. The shortening of the snow season and the temporal shift of peak SWE to earlier times may lead to larger alpine river discharge in spring and reduced summer discharge, which is also likely to affect hydropower generation. A shortening of the snow cover season can also be expected to have strong impacts on Alpine ecology, e.g. on hibernating mammals and on the timing of the vegetation cycle.