Alpine and subalpine vegetation habitat reduction in the Pyrenees 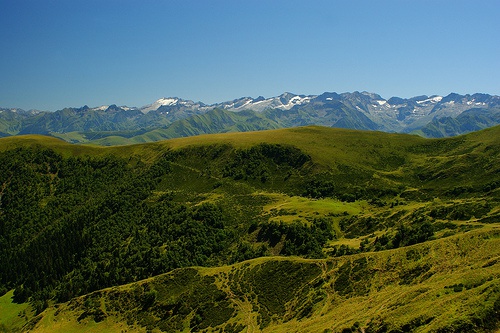 An assessment was made of the impacts of climate change on the potential distribution of six alpine grasslands, two subalpine (and alpine) scrublands and four subalpine forests of Pinus uncinata in the Oriental Pyrenees by the end of the twenty-first century under the IPCC SRES A2 and B2 emissions scenarios, using one global circulation model.

The results show that higher elevation vegetation is more vulnerable to area losses due to climate change than vegetation at lower elevations. The altitudinal extension of the Pyrenees allows scrublands and forest with a subalpine habitat suitability to move upward as the climate becomes warmer and drier. However, the alpine vegetation belt of the Pyrenees is restricted by altitude (there is no more space available at higher altitudes), which would lead to dramatic losses in appropriate areas for different vegetation units. Therefore, the impact of climate change will mainly affect alpine vegetation units. For 2080 average losses in potential ranges are projected of 92.3–99.9 % for alpine grasslands, 76.8–98.4 % for subalpine (and alpine) scrublands and 68.8–96.1 % for subalpine forest. Alpine grasslands can be expected to become relegated to refuge areas (summit areas), with their current range being taken over by subalpine scrublands. Furthermore, subalpine forest units will probably become displaced and will occupy areas that currently present subalpine scrub vegetation.

Thus, a real challenge lies in the preservation of biodiversity of the mountain summits, since the species living there lack areas of expansion and will be subjected to great pressure, both by the degradation of the conditions appropriate to each species and by the arrival of new competitive species from lower altitudes. According to the assessment results, an average of 25 % of high mountain Pyrenees vegetation units is projected to lose their entire suitable area by 2080 under this climate change scenario.

These results do not consider either competition phenomena or the ability of species to resist severe climatic conditions that are not lethal for their survival, however; therefore, actual loss of area of occupancy of the studied vegetation units by 2080 could be considerably lower than predicted based on the results of this work.