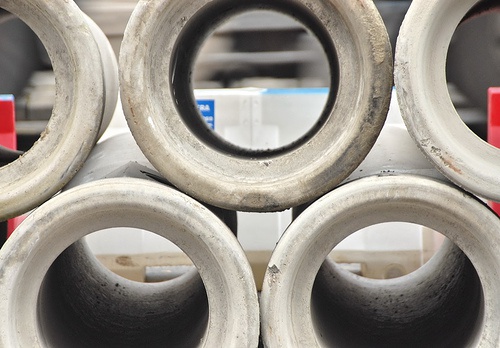 Design parameters for urban drainage systems in Belgium have been revised. The revision involves extrapolation of the design rainfall statistics, taking into account the current knowledge on future climate change trends till 2100. Uncertainties in these trend projections have been assessed after statistically analysing and downscaling a broad ensemble set of 44 regional and 69 global climate model runs, based on three different emission scenarios (A1, A1B, B1). The simulation results were considered for the scenario period 2071–2100 and the control period 1961–1990.

It was shown that the 10-year design storm intensity can increase up to about 50% by the end of this century. Or, systems currently designed for a 20-year return period of flooding, might flood with a mean recurrence interval of – in order of magnitude – 5 years by the end of the century. It is found that increase in storage capacity of 11–51% is required to keep the overflow frequency to the current level. Thus, sewer surcharge or flooding might occur up to about twice to four times more frequently than in the present climate (if no other environmental or management changes are accounted for). It is clear that this might have a significant impact on future urban water management and planning, and that adaptation strategies will be required.

Statistical downscaling was used to bridge the gaps between the climate model scales and the local urban drainage scales and to account for the inaccuracies in describing precipitation extremes.

One way to deal with the huge uncertainties in the future climate change is to consider (in addition to the traditional range of return periods up to 5 years) a 20-year design storm for scenario investigation. Research has shown that a 20-year storm could become – in order of magnitude – a 5-year storm. If after a design for a 5-year storm, the 20-year scenario investigation would conclude that specific zones along the sewer system would have severe additional impacts, changes could be made to the design or flexible adaptation measures designed for the future.