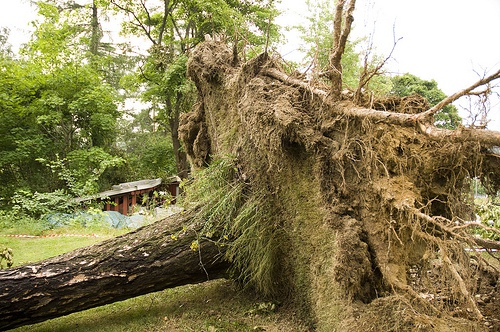 Severe hurricane-force (> 32.6 m/s) storms can cause floods in west-European coastal regions and inflict large-scale damage on infrastructure and agriculture. In the present climate, such storms primarily occur in winter and are associated with mid-latitude baroclinic instability. However, global warming and increased sea surface temperatures (SSTs) have the potential to alter the intensity and cause of west-European storms.

Model simulations (based on a climate change scenario showing 1°C less global warming than the SRES A1B scenario) showed that global warming yields an eastward extension of the development region of tropical storms. In the current climate, the main genesis region for hurricanes is confined to the western tropical Atlantic, where sea surface temperatures are above the threshold (27°C) required for tropical cyclones to develop. Future tropical storms that reach western European coasts (and cause hurricane-force storms) predominantly originate from the eastern part of the tropical Atlantic. This is because climate warming in the eastern tropical Atlantic causes sea surface temperatures to rise well above the 27°C threshold.

Model simulations suggest that tropical hurricanes might become a serious threat for Western Europe in the future. An increase in severe storms of predominantly tropical origin reaching Western Europe is anticipated as part of 21st global warming.

After their formation, tropical cyclones move in a north-westerly direction. When they reach the mid-latitudes they are caught by the predominant westerly winds, thereby veering their track in a north-easterly direction, with the possibility of reaching Western Europe. Geometrically, this likelihood increases if their genesis region in the tropical Atlantic is further to the east. In addition, the shorter travel distance in the mid-latitudes will enable the “tropical” characteristics of hurricanes to be better preserved along their journey to Western Europe. Hence, the likelihood of these storms maintaining their strength when reaching Western Europe will increase, because there is simply less time for them to dissipate.