Glaciers retreat in Austria in 2100 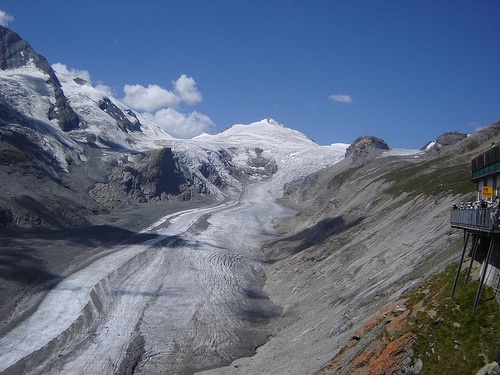 Projections of glacier mass balance in 2100 have been made for five Austrian glaciers; these projections have been generated from ensembles of general circulation model (GCM) simulations by the use of direct statistical downscaling, and are based on IPCC-SRES scenarios A1B and B1.

The downscaled scenarios show a pronounced retreat of the investigated Austrian glaciers until the end of the 21st century. During winter, the glaciers are projected to gain less mass than during previous decades. In summer, projections suggest large losses.

Based on these scenarios A1B or B1 a mass balance reduction of 500 mm water equivalent is to be seen towards the end of the 21st century. Differences in the mass balances between these scenarios are small until 2050. Differences get larger, however, during the second half of the century; the estimations for the A1B emission scenario would give reason for reductions that are twice as large as those caused by the B1 emission scenario.