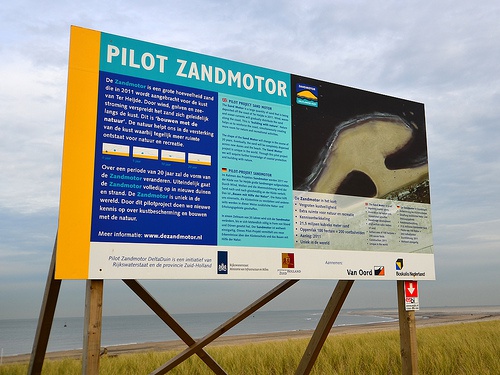 The provinces of North and South Holland on the North Sea coast of the Netherlands are protected by a 120-km-long sandy shore, the Holland coast. Before 1990, the coastal protection was managed with a ‘hard’ engineering strategy (dams, reinforcements and acceptance of beach erosion). After 1990, the policy changed and nowadays the coast is maintained by nourishing it with sand mined offshore.  In 2000, after measurements showed a steepening of the lower shoreface (6–8 m below mean sea level), it was decided to extend the sand nourishment strategy to deeper water. The new maintenance zone, called the ‘coastal foundation’, extends down to the -20-m deep contour. Since 2000, the average volume of sand used to nourish the entire Dutch coast has amounted to 12 million m3 per year.

Along the Holland coast an experiment is being carried out with a concentrated mega-nourishment with 20 million m3 of sand (the so-called Delfland Sand Engine). The present coastal maintenance practice of small-scale nourishments is climate-robust for existing beaches and dunes, as it is flexible and adaptable. Mega-nourishments are expected to mitigate some of the negative impacts of small-scale nourishments and create additional wildlife habitats and opportunities for recreation and economic activities. The mega-nourishment experiment is considered a logical next step in the existing coastal maintenance strategy with shore nourishment in the Netherlands.

The Delfland Sand Engine was completed mid-2011. This mega-nourishment was expected to reduce construction costs, create a more natural coastal profile in the long run and provide a number of ecological and recreational benefits. In the long run, the body of sand will be redistributed over shoreface, beach and dunes, thus enriching the entire coastal cell between Rotterdam and Scheveningen.

The environmental impact assessment described the pilot project as follows: ‘A sand engine is a large sand nourishment just off the coast. The sand is distributed by waves, currents and wind in such a way that the coast continues to grow naturally. This creates a buffer of sand on the coastal foundation against sea level rise, thus guaranteeing the safety of the coast in the longer term. It also creates extra space for nature and recreation. The scale of the sand engine is larger than ever seen before. That is why the construction of the sand engine off the Delfland coast has the character of a pilot, meant to gather knowledge on how to build with nature for climate adaptation’.

The shape of the Sand Engine will change over time. Morphological model projections indicate that the sand will be gradually redistributed over the beaches, dunes and foreshore over several decades, at a rate of some hundreds of metres per year.