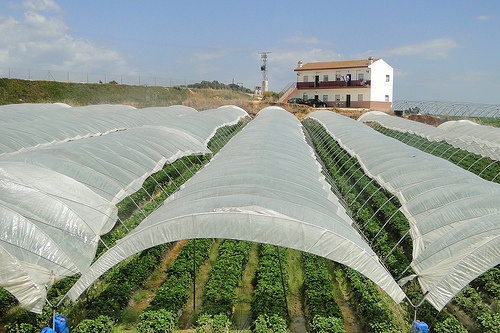 The hot and dry Region of Murcia has become a major producer of fruits and vegetables over the last 30 years; agricultural products make up 35.4% of Murcia’s total exports. However, its agricultural sector is premised on heavy overexploitation of groundwater resources and reliance on the Tagus–Segura inter-basin water transfer (IBWT) scheme, which was inaugurated in 1979. The export of agricultural products, therefore, is a ‘virtual’ export of water from a water-scarce region.

Roughly 60% of the natural flow of the upper Tagus is committed to the Tagus–Segura IBWT. The IBWT has been developed because cities and tourism on the Mediterranean coast needed water to grow and irrigated agriculture in the sub-tropical zones of southern Spain achieves higher water productivity than in the interior regions. However, due to reduced flow levels, the Tagus is now among the most polluted European rivers, and growing water needs in the conceding region have led to bitter disputes.

For the past 30 years, regional water demand in the Segura basin has surpassed availability of renewable water resources as a combined effect of increased irrigation (87% of current water demand) and rapid urbanization (7%). As a result, ironically, the IBWT scheme has only further aggravated the region’s chronic water shortage. Without groundwater and IBWT, about two-thirds of the region’s agricultural area would be abandoned. Agricultural output would be decimated to less than 5% of its current value.

The region’s farmers feel trapped in water-dependent productivity and fear any reform that negatively affects their resource base. They see no option to continue farming if confronted with complete water depletion (physical water scarcity) or high levels of water taxation (economic water scarcity). These scenarios would lead to very large reductions in water use by agriculture, but also result in a contraction of the regional economy by more than 13%.

A low water tax scenario would lead to a relatively limited contraction of the regional economy of Murcia by 7%; this suggests that the agricultural sector has a self-organizing capacity to deal with some of its water use inefficiency. This capacity may be limited with respect to a further increase of water demand due to climate change, however. If climate change leads to reduced rainfall inputs, this would not only reduce groundwater recharge rates, perhaps hastening groundwater scarcity, but also limit the viability of switching from irrigated to rain fed agriculture. Resolving water scarcity through new IBWT development may lead to regional economic development (4–5%) but only increases the region’s dependency on water. Desalinization could be a solution. However, average energy demands of desalinization are more than a factor of 3 higher than for the Tagus–Segura IBWT.