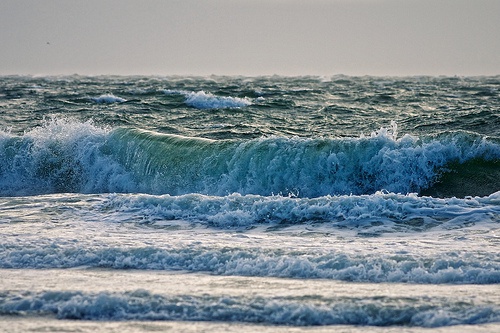 From model studies based on two IPCC emission scenarios (SRES A1B and B1) for the period 1961–2100 (excluding sea level rise) it was concluded that, despite the remaining uncertainties toward the end of this century, extreme storm surge heights likely will show a small increase toward the coasts of the German Bight with stronger changes along the North Frisian Islands in case of anthropogenic climate change.  This increase is superimposed by strong decadal variability. Human activities in the German Bight and along its coasts may be confronted with more frequent surge-induced impacts throughout the twenty-first century.

The 99 percentile of the annual 10 m height wind speed is a good measure of storminess because this percentile reaches about 18 m/s near the North Sea coasts. This is just above eight beaufort which is a storm benchmark. Linear trends in the results of these model studies are small compared to the decadal variations and range between 3 to 10 cm/century and between 0 and 14 cm/century for annual 99 percentile and maximum surge heights, respectively. Not all of these trends are statistically significant, however; all realizations show that larger and statistically significant changes are mainly limited to the south-eastern part of the North Sea. The more reliable changes of the ensemble mean show an increase of about 5% in the German Bight for the surge height. This agrees with the projected increase in frequency of stronger south-westerly and westerly winds which enhance the wind-setup toward the east.