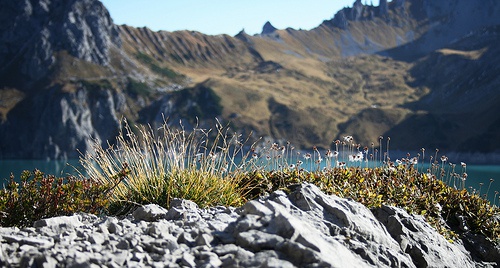 The extremes of possible climate-change-driven habitat range size reductions are commonly based on two assumptions: either species instantaneously adapt their ranges to any change in the distribution of suitable sites (`unlimited dispersal' scenario), or they are unable to move beyond the initially occupied sites (`no dispersal' scenario). In addition to these static, niche-based model predictions, a so-called hybrid model was used that couples niche-based projections of geographical habitat shifts with mechanistic simulations of local demography and seed dispersal.

The hybrid model simulations indicate that by the end of the twenty-first century high mountain plants in the Alps will have lost 44-50% of their present alpine habitat ranges. These forecasts include a large proportion of remnant populations under already unsuitable climatic conditions, however. The persistence of such remnant populations creates an extinction debt that will have to be paid later unless species manage to adapt phenotypically or genetically to the changing climate and to the likely associated alterations in their biotic environments.