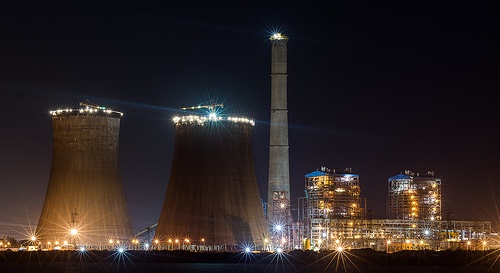 The possibe impacts of climate change on thermal power plants have been inventoried from the literature:

Gradual climate change. Research has shown that a rise in ambient air temperatures of about 1 °C would reduce the thermal efficiency of a thermal power plant by 0.1–0.5 %. The total capacity loss accounts for 1.0–2.0 % per 1 °C higher air temperatures, including decreasing efficiency of cooling processes and shutdowns. The effects and the relevance of gradual climate change on the probability of power outages and blackouts are difficult to quantify. It has been stated that by 2040 capacity reductions of 13–19 % are possible due to increasing water temperatures and decreasing runoff in Europe. For the US reductions of 12–16 % in capacity have been estimated by 2040.

Heat waves. Extreme heat leads to a shortfall in water supply or high river temperatures, influences the cooling of the building itself, and may lead to spontaneous combustion and self-ignition of coal stockpiles.

Wind-related impacts. Wind load pressure can cause the uplifting of tiles and roofs, damage to overhead lines and to storage tanks, and it can lead to damage to insulation and cooling towers.

Thunderstorms. When a lightning strike hits the tank, off-tank fluids may be ignited. Additionally, direct hits or creeping currents can damage electricity distribution and the control equipment necessary for power plant operation.

Water temperature. Rising water temperatures lead to a higher withdrawal of water in order that legal and environmental thresholds for the temperature of discharged water can be met without the need for large reductions in efficiency. If the higher amount of cooling water is still not sufficient, the power plant efficiency decreases further and the energy conversion consequently needs to be reduced in order to meet environmental thresholds. There are numerous examples, from the United States in 2002, Switzerland, Germany and France in 2003 and France, Spain and Germany in 2006 where high ambient water temperatures have resulted in reduced power output at several thermal power plants; some of them even had to be shut down.

Floods. Most of the impacts of a site flooding occur to the connected infrastructure, such as uprooting and displacement of storage tanks, rupture of pipes and cable connections, underground breaching of tanks due to collision with debris, disruption of water purification and sewage disposal systems, short-circuiting and power outages resulting in malfunctioning of cooling systems, pumps, and safety systems.

Three kinds of adaptation categories have been identified with respect to thermal power plants:

Adaptation of the cooling options: the use of so-called non-traditional waters (waters that are not withdrawn from a river, lake, the groundwater, or the ocean, but are otherwise obtained from the environment, for instance, recirculation of water from oil and gas fields or coal mines); the reuse of process water; dry cooling towers that emit surplus heat only by convection without causing water loss through evaporation; regenerative cooling where the compressed steam cools down because it is allowed to expand; heat pipe exchangers that allow the conveyed steam to release heat to the environment without direct contact (the cooled/condensed steam can be recirculated).

Adaptation of the (infra-)structures: adjust standards for construction and protection of power plants and connected infrastructure; installation of underground cables instead of overhead wires, as the former are less vulnerable to storm, wind throw, and freezing/ice loads on wire.