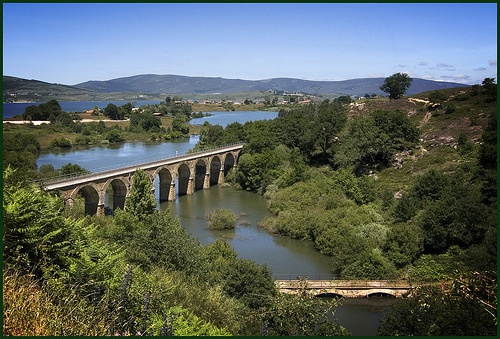 Global scale studies identified the Mediterranean region as one of the most vulnerable regions to climatic and anthropogenic changes and thus as one of the world’s water crisis hot-spots. At the 2050 horizon, climate change will most likely contribute to the depletion of freshwater resources in the already arid and semi-arid catchments of the Mediterranean basin. If domestic and agricultural water demands follow past trends, catchments in Spain and on the southern and eastern rims will have to deal with high to severe water stress.

The Ebro catchment is the largest basin in Spain. It drains an area of about 85,000 km2 in north-eastern Spain. The water system is concentrated around the Ebro, a 910 km long river flowing from the Cantabrian Mountains to the Mediterranean Sea.

In 2007, agricultural water demands represented 92% of total demand, followed by domestic water demands (3.8%), the industrial sector (2.7%) and water transfers (1.5%). With its 940,000 irrigated hectares, the Ebro basin is host to one fifth of the country’s irrigated area. It is a key element in the Spanish agricultural production with, respectively, 30% and 60% of the meat and fruit production of the country. The Ebro catchment also represents 8.8% of the national Spanish industrial production and produces 25% of the hydro-electrical energy in Spain.

Over the 1957–2002 period, mean annual discharge decreased due to climatic variability (a rise of 0.7°C in mean annual temperature and a 12% decrease in mean annual precipitation), reforestation processes, the building of 230 storage-dams along the Ebro River for hydropower production and irrigation water supply purposes, and the increase in water demands.

Monthly freshwater supply was estimated for each year of the reference climate period 1971–1990 and the future climate period 2041–2060. Projections of climatic changes were based on outputs from four Global Climate models (GCMs) and the A2 greenhouse gas emission scenario which corresponds to a major increase in greenhouse gas emissions, and thus to very substantial changes in climate.

Water resources and current dam management fully satisfy current environmental, domestic and agricultural water demands all year round. At the 2050 horizon, on average, temperatures are expected to rise by 3°C and precipitation to decrease by 10–25% during spring and summer. As a result, water resources could drop by 15–20% in Pyrenean sub-catchments and by 25–35% in the Ebro valley. In addition, population is projected to increase (+0.5 millions), especially in the Ebro valley, and irrigated areas are expected to expand by 30% mostly in already highly productive areas. The combined effect of decreasing water resources and increasing water demands could lead to water shortages in the Pyrenean sub-catchments in summer.