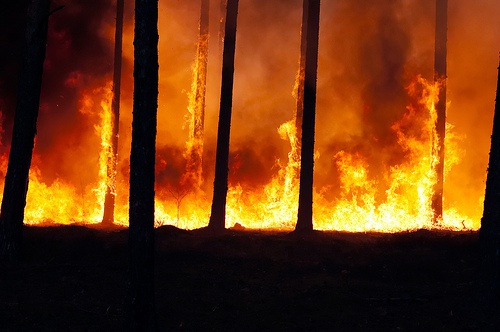 So far, forest fires do not constitute a significant hazard in the central and northern parts of the Alps, while on the southern side they are more common even if the fire number and the burned area are low compared to the neighbouring Mediterranean area, where the climate is more in favour of the development of frequent and large wildfires. Due to their high potential impact in terms of human lives, commodities and natural heritage, however, the Alpine forest fires require a relatively large amount of resources for fire-fighting and prevention: the mountainous environment makes fire fighting very difficult, and a rapid intervention is required because the fires readily endanger human activities and infrastructures. Furthermore, secondary damages via other consecutive natural hazards, such as an enhancement of debris flows, erosion and avalanche danger, may occur, too.

The impact of climate change on the fire potential in the Alps in the past and in future scenarios has been evaluated from a multimodel approach (simulations from 7 Regional Climate Models), a detailed Regional Climate Model for the Alps area (COSMO), and data on daily temperature and precipitation observations during 1961–2010. The scenario period is 2031–2050; the RCM projections are based on the SRES scenario A1B.

The changes in the mean fire potential conditions derived from the 7 Regional Climate Model simulations showed a generalized increase of the fire potential in the Alps, according to the majority of its input models, while the COSMO scenario revealed a light signal of a decreasing meteorological fire danger in the Northern Alps. The researchers stress the importance of a multimodel approach and state that it is very risky to draw conclusions based only on a single model, due to the quite different behaviour of precipitation scenarios from different models and their large biases in a mountainous region such as the Alps.

Previous research has shown that in recent decades the strongest increase of forest fire danger has been observed in the Southern Alps, while north of the Alps no clear trend was observed. The model results confirm the trend in the Southern side of the mountain chain, while it confirms the uncertainty of the projected changes in the Northern side.