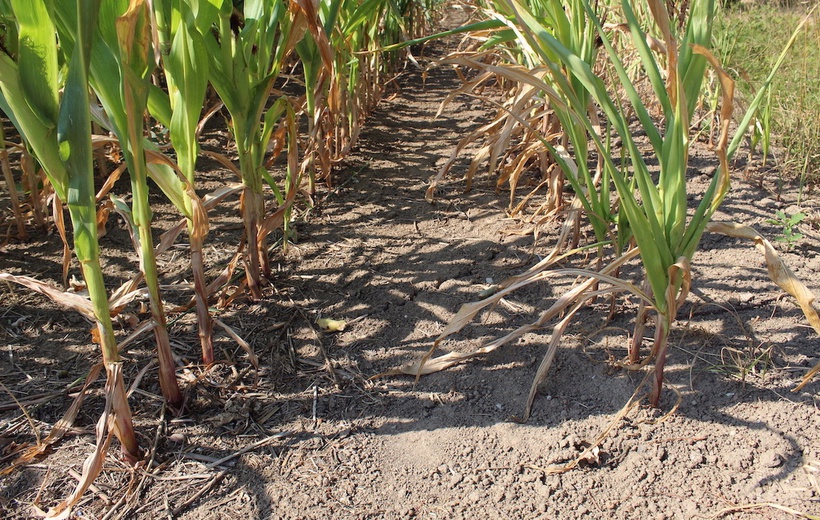 Photo: Global maize yields are projected to decline, even if we succeed in stabilizing the climate at 1.5° to +2°C global warming

Possible implications of +1.5° and +2°C global warming for global food production have been assessed for yields of maize, wheat, rice, and soy. The assessment was carried for a future world that is +1.5° and +2°C warmer than the pre-industrial past. These are the targets of the Paris Agreement. In addition to changes in temperature and precipitation, also the impacts of changes in atmospheric CO2 concentrations were included.

Four crops were studied: maize, wheat, rice, and soy. The distinction between maize on the one hand, and wheat, rice, and soy on the other is particularly relevant since these crops have different photosynthetic carbon cycles. Hence, they respond differently to changes in atmospheric CO2 concentrations.

When global warming moves from +1.5° to +2°C, maize yields decline further, up to about -5% compared with the current situation. Wheat and rice yields increase slightly (+1 to +2%), and soybean yields increase more substantially (+ 8%).

Irrigated crops respond in much the same way as rainfed crops. In both the + 1.5° and + 2°C Worlds, irrigated maize losses are large over much of North America, China, and southern Europe, while yields are reduced for the irrigated wheat basket of South Asia.

The benefits of higher CO2 concentrations

CO2 effects are widely understood to be positive even as the magnitude of this benefit is uncertain. Overall there is strong agreement that crops like wheat, rice, and soy benefit more from higher CO2-levels than crops like maize.

Without CO2 effects, the production of all four crops would be lower in a + 2°C World compared with the current situation. Thanks to the CO2 effects, however, wheat, rice, and soy yields improve in the + 2°C World: in nearly all world regions the CO2 fertilization effect largely overcomes negative impacts of temperature and precipitation. For maize yields, this beneficial CO2 effect is much lower and yields decline further as temperatures rise to the +2°C World.

In the +1.5°C World, reductions in maize and rice production drive up their prices, increasing cropped area to make up for production gaps. Wheat prices and area also increase despite nearly flat global production levels, likely carried upward by pressure on maize and rice. Increases in soy production may lead to declining area and lower prices.

The implications of stabilizing global warming at +1.5° and +2°C go beyond the direct impacts of changes in temperature and precipitations, and the response to higher CO2-levels. Ambitious mitigation policy to achieve this climate stabilization may lead to croplands being used for bioenergy crops. This may affect food production and disturb food prices. In fact, bioenergy expansion may be more disruptive to land use and crop prices than the climate change impacts alone. This would require substantial intensification in remaining agricultural systems to meet food demands.

Land use competition from bioenergy crops may lead to higher food crop prices compared with a no-mitigation scenario. Thus, the costs of mitigation to achieve +1.5° and + 2°C Worlds may likely exceed the costs of adaptation to those new climate conditions. This may also lead to a corresponding increase in hungry populations and food insecurity compared to climate change alone.