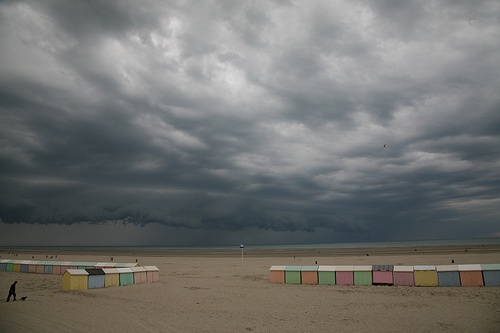 Wind-storm losses on a European-wide property insurance portfolio have been quantified under current and future climatic conditions. This has been done by coupling the output from state-of-the-art regional climate models to an operational insurance loss model, and thus combining both meteorological and insurance aspects of storms. Projections were made for 2071–2100 and compared with 1961–90.

The climate change projections show that, consistent with existing studies, the strength of the extreme storms are expected to increase in a band across central Europe (southern UK, German bight, northern Germany, and into eastern Europe). The increase is stronger for the rarer events. Wind gusts of storms decrease over northern Scandinavia and Southern Europe and the Mediterranean.

For the 110-year period a mean increase of 44% (annual expected loss), 23% (10 years loss), 50% (30 years loss), and 104% (100 years loss) for Europe was calculated. There is a disproportionate increase in losses for rare, extreme events. The changes result from both, an increase in severity and frequency of the selected storm events.

A large country-to-country variability of the expected losses exists, due to the combination of the spatially inhomogeneous insurance portfolio and the horizontal variability of the gust change. Denmark and Germany experience the largest relative loss increases (116% and 114%, respectively), whereas Ireland shows a negative mean climate change impact. The changes for the UK, Switzerland and Norway are positive, but still inconclusive due to high ensemble variability.